Looking at the work of Escher, David Hockney, Anthony Green and Philip Pearlstein and their work on interiors. Also my own slant on this subject. Not my usual choice of subject matter but very enjoyable nonetheless!

for this stage of the module, we were asked to draw different parts of the home in short sketches. I started off drawing in the bathroom and kitchen using pastels and charcoal, just quick sketches and I very quickly realised that I was NOT having any pleasure from doing it in this way. I think it shows in the quality of the work that I produced. Though it fulfilled the criteria for the short sketches it was like pulling teeth and I HATED it!

this is what I produced:

the first sketch is obviously my bathroom and the second one I chose to concentrate on the kitchen sink. It was very apparent to me that I would need to find a way of adapting the task to suit my way of working and to make it an interesting and fun thing for me to do, in order that the quality of the work would be better, I find that when I am drawing something and really not enjoying it, the quality definitely suffers.

I thought for a while about this and realised that the things that I love drawing, people, faces, animals, plants. abstract shapes, all have one thing in common…. none of them have straight lines! this is completely the opposite when drawing things that are manufactured and built to an architects design around the home, there are a multitude of precise angles and straight lines.

On realising this I decided that the way that I would be able to inject something exciting into the work, I would observe the room through my digital camera’s fish eye lens.

At first I frew a very quick sketch of the kitchen with pencil, whist standing with the

camera, but realised very fast that this would just not be possible fot eh other drawings. I am disabled and standing or even sitting with lots of equipment and trying to draw simultaneously without anything to lean on, would be impossible. I was viewing the room from an elevated view point so this was proving to be very difficult indeed.

I decided that I would need to take photographs using the fish eye lens and work from those instead, offering me the opportunity to get some really quirky angles and throw myself into the task with much more enjoyment and fun!

I went on to draw the living room using biro and pencil, I took a photo from high up looking down on the living room from the corner, and then focussed back on the kitchen sink with the tap running.

I was actually really, really enjoying this work now and I am certain that this is reflected in the quality of the work, which is miles away from the initial sketches that I did.

The research point in the course materials presented two drawings. The first is Anthony Green’s “Study for Mrs Madeleine Jocelyn with her son” (1987) and the second is Philip Pearlstein’s “Male Model with Kimono and Female Model with Mirror” (1985) seen here:

The first thing that strikes me about these two drawings is that despite the fact that they are very, very different, both of them play with perspective, whether we look at Anthony Green’s study, which is obviously drawn in such a way that it disregards perspective in the typical sense completely, by presenting the whole room in one go , even though it would be impossible to see it in that way with the naked eye, or looking at Philip Pearlstein’s work, where the perspective is actually accurate, the nature of the composition makes it appear that things are somehow not quite right.

I love the ‘push-pull’ feeling that I get when I look at Pearlstein’s work, the legs going in opposite directions and in such a striking diagonal placement, almost draws the eye in a kind of ‘roller coaster’ way, moving the eye around the page drastically and dramatically.

I can also see how the fish eye lens that I have been using reflects the same sort of effect and is a pleasing way of viewing more of the room in one drawing than you would normally see. The addition of the mirror in Pearlstein’s piece offers this same depth, giving us the opportunity to view things from more than just the ‘standard’ perspective.

Looking at these two pieces also reminded me of David Hockney’s work around interiors and the work of Escher who messed about with perspective, perhaps more than I was planning to, but again offering more of the landscape to the viewer than would be there ‘naturally. There was one drawing by escher that I was thinking of in particular.

With this one I like the way that it almost has the fish eye lens effect, with none of the lines being particularly straight and the feeling of the drawing is that it curves around a centre point. I also like the colours and the way that the eye is drawn straight to the centre of the picture.

I also like the fact that it has loads of detail and content but is somehow really naive and simplistic at the same time! I also liked another of his pictures which I chose to add here too.

This one is along the same lines, the curve of

the drawing pulls the eye into the centre of the picture in the same way as the first one, perhaps even more so. It also has the same quality as the drawings by Pearlstein and Green, in that it offers more of the room to the viewer than you would normally find in a picture of a room, the edges of the room are pulled in to include more detail and space and again, despite the content and detail being very rich, it has that same naive quality.

The drawing that I had in my mind by Escher is the following:

I love how this drawing includes both the room and the artist himself. I actually had wanted to find a large reflective ball to draw in the same way, but had to compromise with the fish eye lens instead because I was unable to find one. Again, this drawing, though actually done with less space, and with a smaller area to fill, still offers much much more to the viewer of the room and the space it is depicted in than if it was just a reflection in a flat mirror. I love how we know that those shelves are straight and parallel, but in the drawing they are not. The curves I find really pleasing and exciting to look at and I feel that I have managed to bring something of the same effect to my own drawing.

I initially decided to draw my fish eye lens final piece in oil pastels, and After drawing around a huge bodhran drum to get the size and shape that I needed to draw the lens aperture, I plunged in using a blue colour scheme, after playing with alternative colours in a previous exercise in the module. However this was a huge failure. 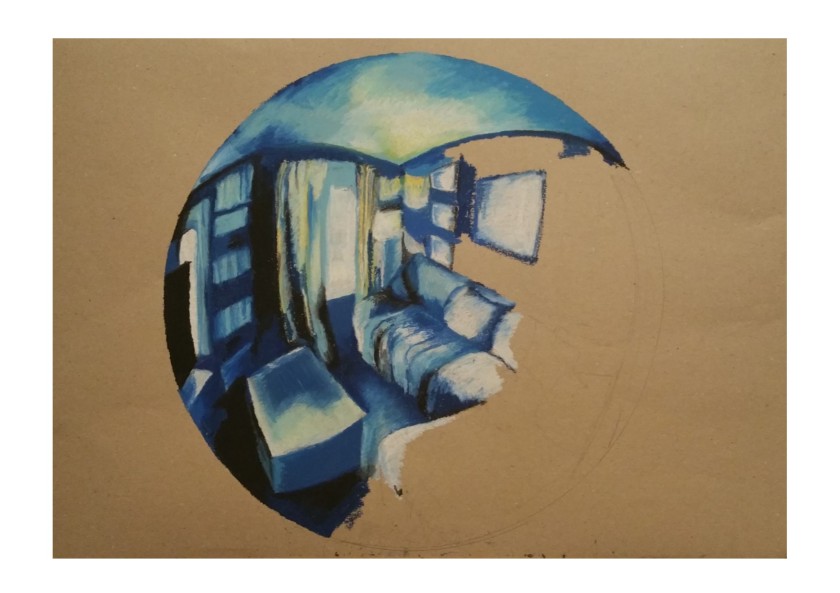 It looks clumsy and clunky and messy and I was really unhappy with the result. I did endeavour to stick it out and finish the drawing but it became clear after some hour or so of drawing that I was on a hiding to nowhere in terms of making a decent looking picture and I decided to discard that effort (I have included it in my folder though) and move onto a medium that I felt would offer me the opportunity to add detail, but still retain that naive quality that has been a feature of the works that I have seen that I particularly enjoyed looking at.

I actually did not expect to enjoy drawing this last piece as much as I did. I had fleeting memories of the initial room sketches that I had done in soft pastel and charcoal and shuddered at the thought of trying to make something staid and architectural like a room enjoyable and pleasing to look at in picture form. It really wouldn’t be my usual choice of subject and definitely something that I would not have thought would be a fun way of spending an afternoon! To my absolute amazement, I LOVED drawing the whole picture and was a little bit sad when I had finished as I would have liked to have spent more time doing others. I think it would be a really good thing to have a set of three or four of these fish eye lens drawings, in different colour schemes and either different rooms or different perspectives of the same room.

I chose to use blues and purples on the whole but added in the warm yellow of the standard lamp which I think draws the eye even more to the centre of the picture. I also used the warm tones of the yellow in the light cast on the wall and the sofa in parts. I think that I have managed to capture the light and dark of this interior really successfully, the light that is prevailing is the stark bright outdoor light coming through the windows which has cast some really nice shadows and added a lot of contrast and silhouette in places which is very pleasing to look at and could appear gloomy, but I think presents itself as rather striking.  I’m also really pleased that I have managed to make the fabric of the curtains have a somewhat translucent effect, with the bright external light behind them. I love the curved lines and the way that the walls draw you into the room, and again, like the work that I have admired so far, the way that the perspective that I have used allows so much more of the room to fit into the picture than if I had just drawn a flat, regular perspective drawing.

Overall I am really satisfied that this is a successful drawing and meets the criteria and outcomes that are expected of me, and I very much enjoyed making this. 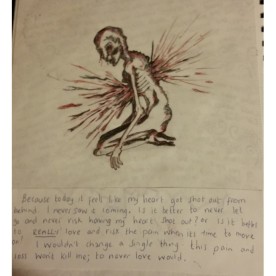 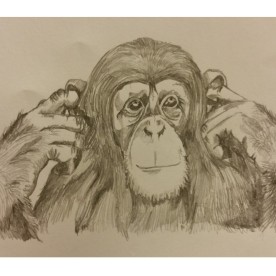 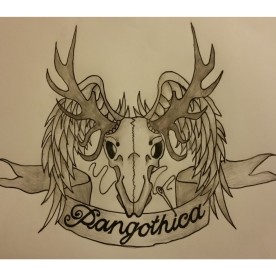 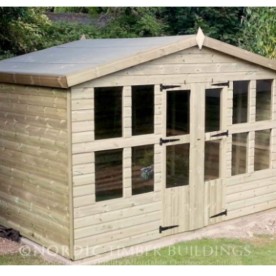 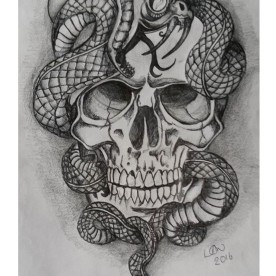 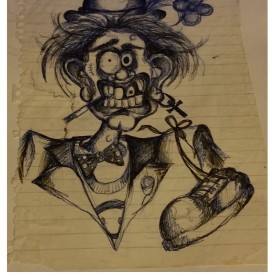 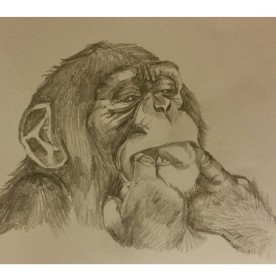 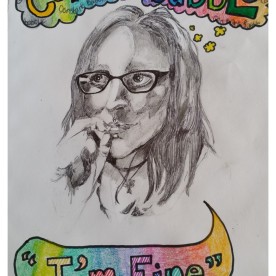 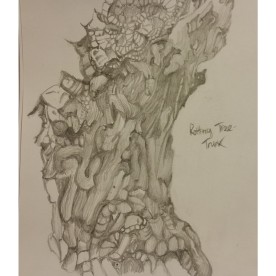 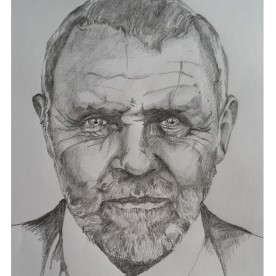 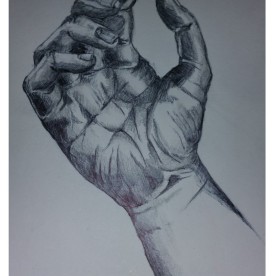 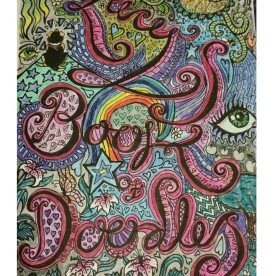 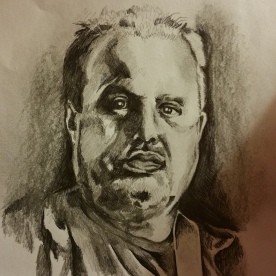 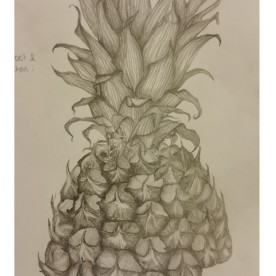 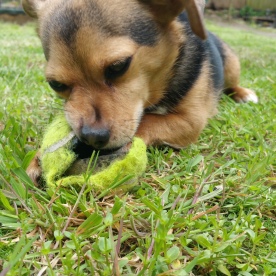 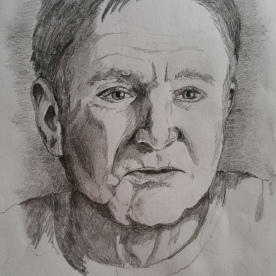 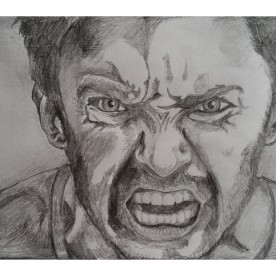 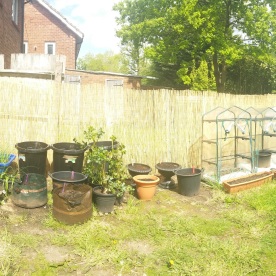